Walking in Toronto Downtown and this happened..

Walking in Toronto Downtown and this happened..

I decided to revisit the glass bridge connecting the Eaton Center Mall and The Bay (department store). The bridge crosses Queen Street in downtown Toronto and was the location of last week’s portrait of our Human Family friend John who was visiting from Dublin. It’s an interesting structure and yet the light is a bit tricky. I just wanted to look it over again and try to figure out the light. I was taking a photo of pedestrians crossing the bridge when this smiling face appeared. He asked with a Spanish accent “Would you like me to take a photo of you with your camera?” I quickly decided to take advantage of the friendly offer. (You can see the photo I was taking and the one he took of me in the Comments below.) He showed a creative flair with my camera and wanted to include the Old City Hall buildings in the background. Thanking him, I asked where he was from and transitioned into introductions, a handshake, and an invitation to include him in my Human Family portfolio. Meet Max.

#Maxgarciatv came across as a very friendly, confident, outgoing fellow and he said he is originally from the Dominican Republic, the beautiful nation that, with its neighbor Haiti, makes up the Caribbean island Hispaniola. (en.wikipedia.org/wiki/Dominican_Republic) Max happily posed for a few portraits before we chatted. I pulled out my reflector, something I wished I had done with my fellow Human Family friend, John last week in this same location. Because he has so many years under his belt in the media industry, Max instantly fell into the routine and casually took on the reflector duties which saved me a good deal of time in postprocessing. I was struck by Max’s ease and confidence during the entire encounter. Before I knew it, he had handed his cell phone to a man passing by and asked him to photograph me photographing him. (www.instagram.com/p/BbhyyWfgDUs/) The whole experience happened in a flurry of smiles and good will.

Max’s outgoing personality and comfort with the unexpected made sense when I discovered that Max has more than 20 years of experience in the broadcasting business and is a well-known television personality with his own talk show “Tonight with Max Garcia” which he hosts and produces. The show has been running for 14 years so he’s clearly doing something right! As if that isn’t enough, Max, who is now residing in New York, is also CEO and Program Director of a new Latino television station which provides Dominican cultural programming but is also reaching the broader Hispanic population. Part of Max’s mission is to create a bridge between the Hispanic culture and English-speaking people who want to learn Spanish. (How appropriate that we met on a bridge!)

Max is 37 and father of two children. His message to his younger self is “Don’t listen to what people say you should or shouldn’t do. Follow your own spirit and never stop dreaming because you can make your dreams come true.” When I asked about a challenge he has faced he quickly said “I’m facing it right now in the form of Donald Trump who seems determined to spread hatred and create divisions between people of all cultures and races.” Max is concerned about the current wave of resentment and fear being directed at residents in the U.S. who were born elsewhere and he is very concerned about its impact on his two children who he is trying to raise to feel proud of their background.

Max’s message to the project is “Do the things you want to do and do them now. Don’t get too focused on simply making money. Life is short and we shouldn’t wait but should chase our dreams now.” This was a very uplifting encounter and as we were saying goodbye to each other, Max said he had been spending the last couple of hours exploring downtown on his own and was glad to meet me and participate in my project. I can only say I enjoyed this spontaneous encounter every bit as much as #maxgarciatv did. Little did I know when I went downtown today that I was going to meet a super-friendly, high-energy television personality from the Dominican Republic! I guess it was just my lucky day. 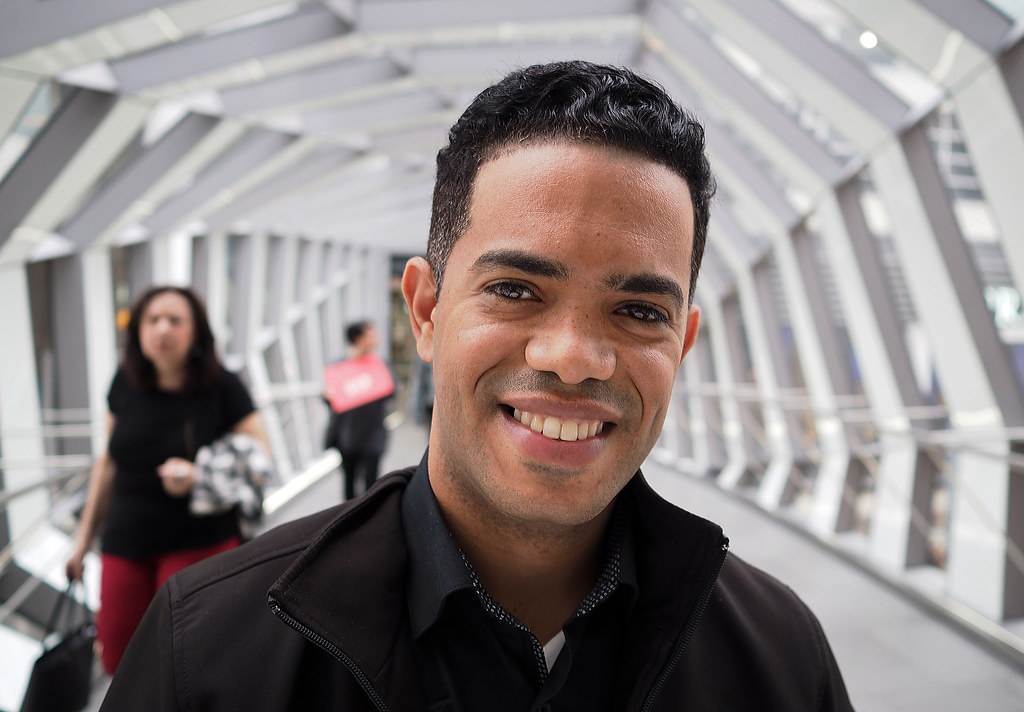